EMAIL PROOF SENT WITH ALL ORDERS. USE CODE MAJESTIC10 AT CHECKOUT FOR 10% OFF YOUR ORDER.

Use this popup to embed a mailing list sign up form. Alternatively use it as a simple call to action with a link to a product or a page.

By clicking enter you are verifying that you are old enough to consume alcohol.

Your cart is currently empty.

What our lovely customers have to say.

Our Princess Patches Pawrait turned out great! It was very nice quality! Our daughter was thrilled with such a nice surprise! I had some questions when ordering and the Pawtraits gentleman was very helpful, kind and friendly. I would highly recommend this company.

Amazing service and great product! A Christmas gift for my partner for a fun surprise. Communication was very professional and I was able to make changes to get the best pawtrait. Very pleased with the finished product. 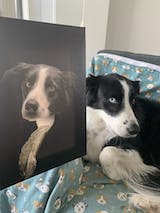 The portrait is amazing! And my friend was absolutely thrilled to receive it. Plus the customer service is amazing! We had a slight issue with the post and they corrected and upgrade free of charge. Wonderful business all round 👌👌👌

Jasper the lab was suffering down at the park at the hands of a gang of bigger dogs who picked on him. If he had a nice stick they would take it from him and chew it up. It even got to the point when the word ‘walkies’ would not even get a tail wag.
Since we got the Majestic Pawtrait done and hung on the wall, he is like a new dog. His trots with a purposeful swagger and the other dogs are now reluctant to steal his ball or compete for his kibble. I swear his bark is a little bit deeper and he even has the gang’s bitches coming to see if he will play fetch with them.
I would recommend a Majestic Pawtrait for any dog, whether he is being hounded by other dogs or not. 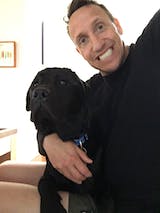 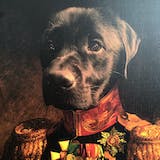 I ordered 2x pawtraits for my own dog and one for a friend - the detail and quality is great. Ordered shortly before Christmas and they arrived with plenty of time to spare, good communication as well.